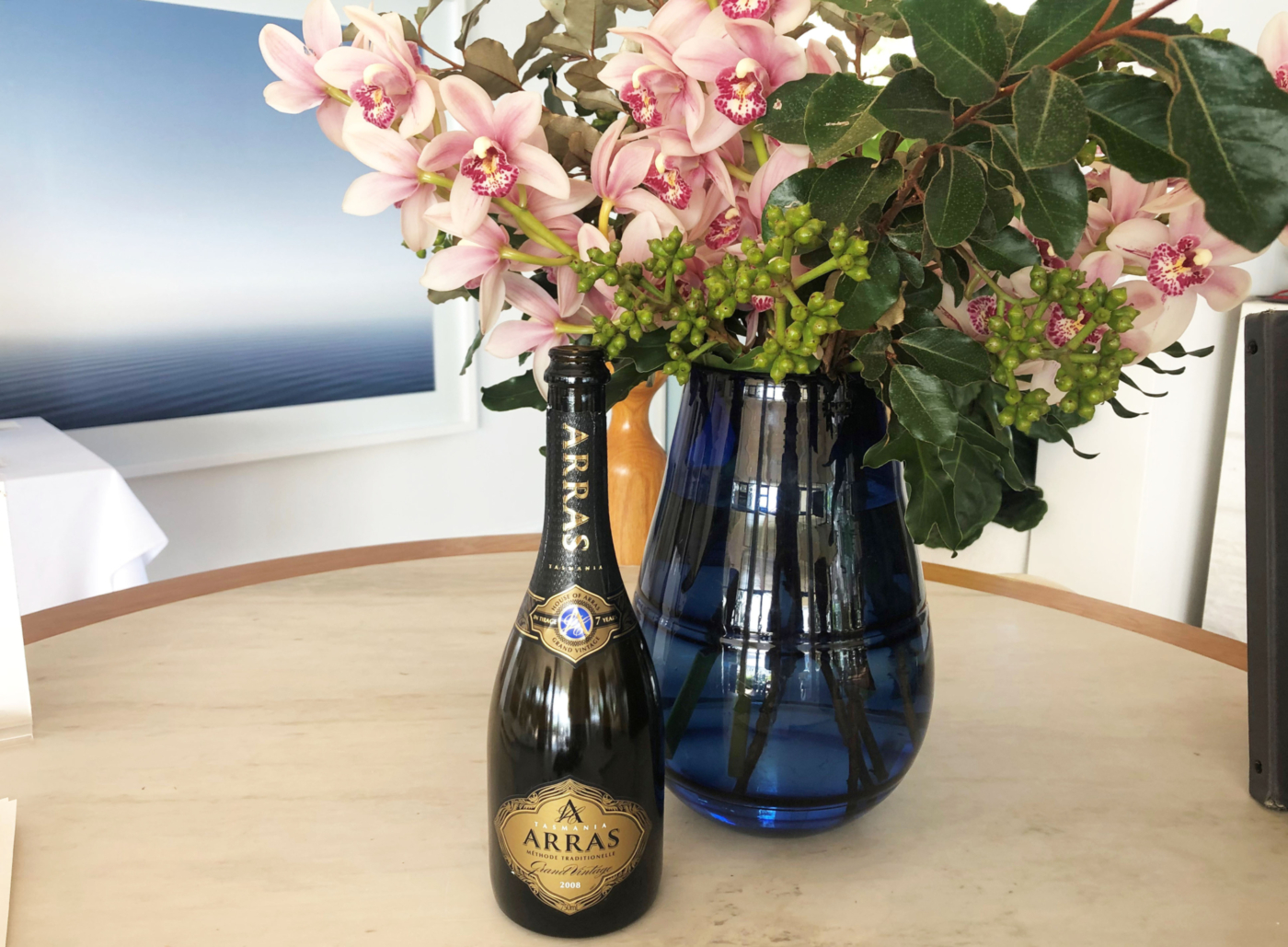 Welcome to the new PDR blog!

For those of you who are unaware, every Wednesday we allow our customers to bring their own wine, for the modest corkage charge of $5 per head. It’s full service BYO, with decanters and proper glasses where appropriate, and gives you an opportunity to eat at PDR while drinking something from your own cellar.

I have to say that the standard is very high. We see very little of the $10 bottle shop bargain bin stuff, and lots of carefully cellared, lovingly laid down bottles that are finally getting their moment of glory. So many in fact, that I’ve come up with a plan. Each week I’ll be featuring the ‘wine of the day’ from BYO Wednesday. You can have your name listed or remain anonymous, but we’d love to feature these great wines – and make it a bit more interesting, even competitive!

Three strong contenders this week. First up, a lovely couple on T144 brought in a bottle of 2008 Arras ‘Grand Vintage’ sparkling from Tasmania. The House of Arras is well known for their widely available non-vintage and Blanc de Blancs. But Ed Carr’s long term vision also encompasses true vintage styles, including this remarkable ‘Grand Vintage’ from the spectacularly good 2008. Interestingly, 2008 was also superb in Champagne…

This wine spends seven years “in tirage”, when the yeast and sugar are introduced to the bottle to produce the crucial second fermentation – and thus the bubbles. Normally the wine is given a few months or maybe a year or two to develop the bready richness from the yeast – but this one’s had way longer than that. And yet it still had freshness and vitality, with the trademark Tassie acidity framing the whole lot like a work of art. Which of course it is. 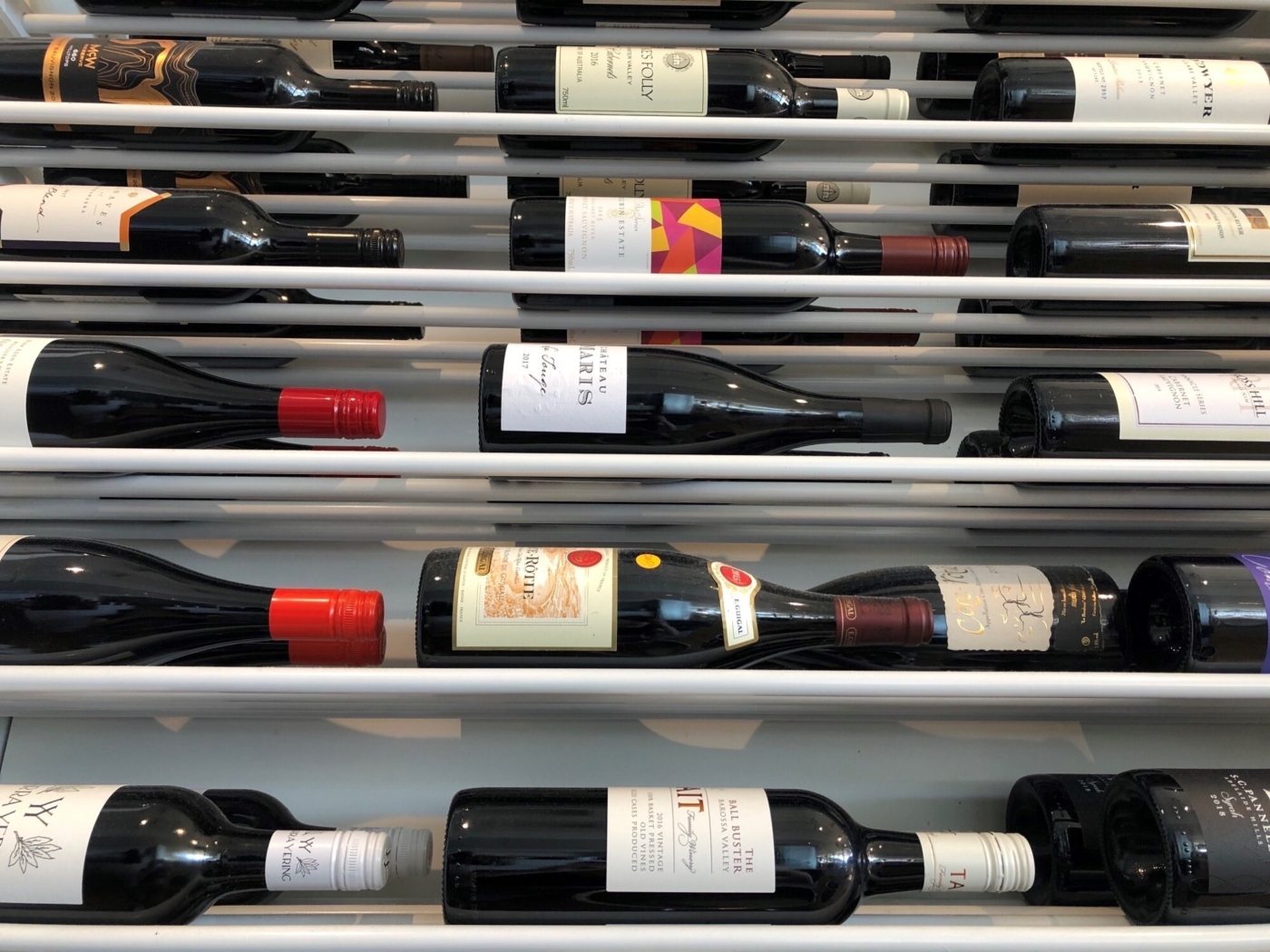 Next up, a 2008 Savaterre Pinot Noir, from Beechworth in Victoria, brought in by one of the two brothers who own the vineyard on T70. Under cork from back then, so I was a little apprehensive. I needn’t have worried – the wine was in fine form. Loads of bottle development, with nice mushroomy character, some spice from the barrel still lingering, and the acid stretching out for some length. Fruit only just starting to fade in this bottle, which would be my only niggle. Not at all bad for thirteen years though.

My final contender: a 2010 Yeringberg Chardonnay from the Yarra Valley. Brought in by four gents having dinner on T51, their wines were all superb: Rockford, Ata Rangi and Grosset were all represented. But the Yeringberg stole their thunder. Still intensely citrussy on the nose, with subtle oak in the background. Whoever made this wine eleven years ago knew what they were doing! The palate was seamless: lemon was joined by nectarine and cashew, but it was hard to define each element. The whole was certainly greater than the sum of the parts, as every great wine should be.

So, a highly competitive night. It was difficult to whittle it down to just three wines. But in the end, I went with the Arras. Congratulations John and Lara on T144! Thanks for bringing in a fantastic wine.

What will next Wednesday bring? 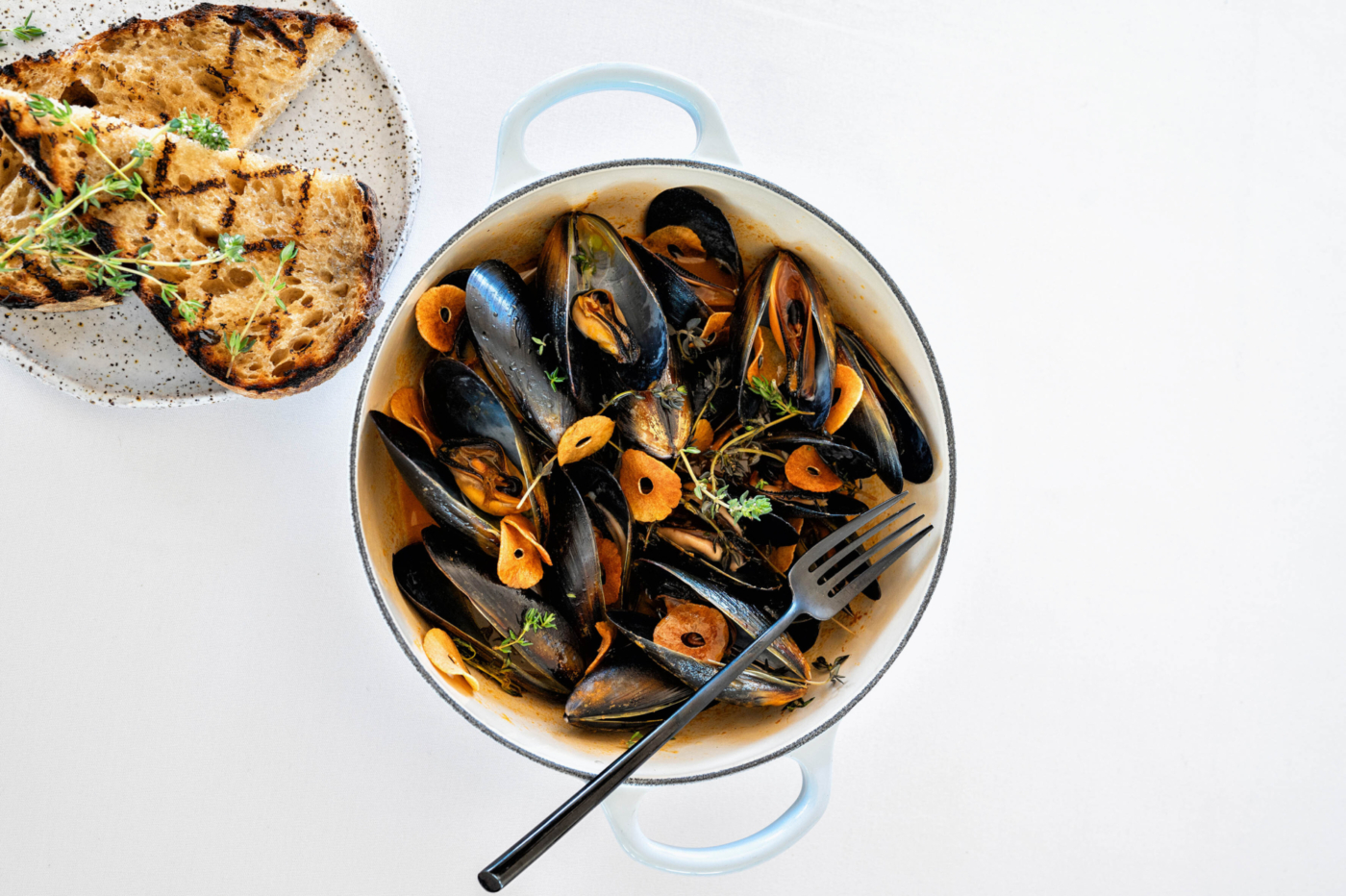 The 'Mussel pot, smoked fermented tomato sauce, thyme, elephant garlic, sourdough' is one of chef Adam's all time favourite dishes on the new autumn menu; for it's simplicity and the wafting aromas, to the delicately balanced flavours.

This dish will see you and your guests transported to the Balmoral seaside! 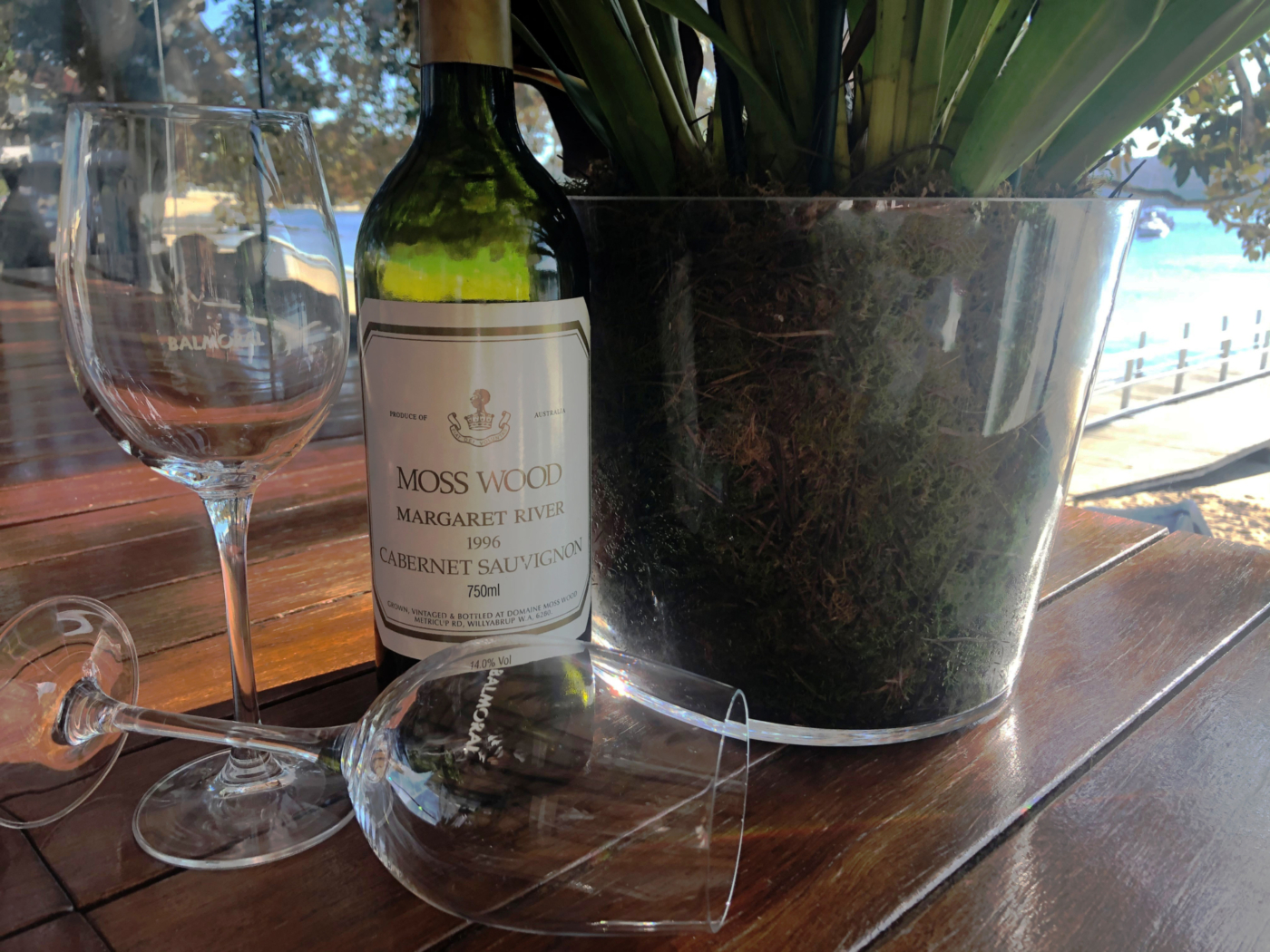 You people catch on quickly!

One week in and the standard has been maintained, even raised. Again, difficult to reduce all the contenders down to just three wines – but at least the winner was clear this week. For those just tuning in, our traditional Wednesday BYO has been spiced up by this blog. Each week I choose the best three wines, and choose an overall winner from those select few. I publish the results through the blog, with credit to the winner on a first name basis. You can of course remain anonymous – but you’d be missing out on all that glory!

So. First up this week from a trio of gents on T70. They opened with a 2017 Domain de Vieux Télégraphe Châteauneuf du Pape Blanc. from the Southern Rhône valley. Unusual, obscure even, as Châteauneuf blanc accounts for a mere 5% of total production. This is grown on the small plateau of La Crau, which has the highest concentration of the famous galets, or “pudding stones”. These big round stones were left by the retreat of glaciers after the Ice Age, and now serve to absorb heat in the daytime and radiate that heat back onto the vines long into the evening, thus ensuring even ripening. The nose was fresh, laden with ripe stone fruit. Roussanne dominated, with fruit and mineralogy in equal parts. Great length too, and at four years old just starting to hit it’s straps. It can be surprising to see good acid and minerality in a wine from such a warm climate, but Roussanne is perfectly adapted to this environment. It’s also why it does so well in the warmer parts of Australia, where similar conditions prevail (think inland Victoria). Roussanne tends to retain acid and freshness in even the warmest of conditions, so much so that it is usually blended with softer varieties such as Grenache blanc or Marsanne. Next up in the final three – and from the same table – a 2010 Massolino Barolo, from Piemonte, Italy. Although Barolo is usually released at five years of age, they really need at least a decade to start showing the complexity they are famous for. So this was highly anticipated. And it didn’t disappoint. The structure was perfect, with acid and tannin playing a duet in total harmony. The bottle age was starting to conjure that delicious complexity, with tobacco and tea creeping in beneath the rosehip and dried strawberry of its youth. Great length on the palate too, with a almost thirty second finish. My only criticism was that this wine is still too young, confirmed by its owner who opined that “it needs another five years” to be at its best. Hope he has some more tucked away…

Finally, an Australian classic: 1996 Moss Wood Cabernet Sauvignon from Margaret River, WA. Brought in by the guest of a regular, who himself brought an excellent wine. Being 25 years old and sealed with a cork, there was naturally some apprehension. No worries! The cork and the wine were in fantastic condition, and with an hour in a decanter by the time it was served, it proved a memorable wine. Amazingly for its age, there was still some primary blackcurrant fruit there. It soon gave way to some classic cigar box notes, with dark chocolate and pipe tobacco on the palate. Tremendous length, with levels of complexity unfolding over the evening. A great testament to Australian winemaking, and proof - if it were needed - that Margaret River is our answer to Bordeaux. The overall winner was the Moss Wood. Congratulations to Ian on T60 for bringing this in. What else do you have lurking in your cellar Ian? Cheers everybody.